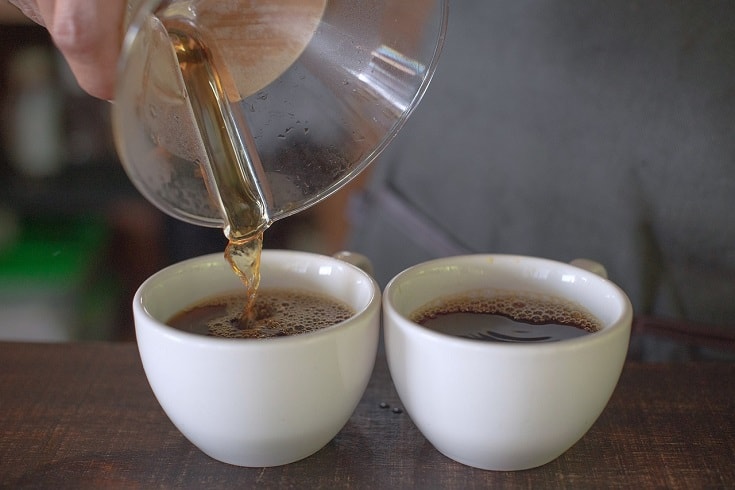 There are many things non-vegans take for granted that make eating and drinking out difficult for vegans. A surprising number of seemingly vegan meals and beverages actually turn out to contain non-vegan ingredients. Luckily, coffee is one arena where vegans are on a level playing field. There are tons of creative – and delicious – vegan coffee recipes that taste every bit as good, or sometimes even better than the non-vegan versions.

In this article, we’re going to run down our six favorite vegan coffee recipes and hopefully give you some general ideas you can use to craft your own vegan coffee drinks.

Yes! Coffee itself is vegan, but some coffee recipes include non-vegan ingredients. Of course, any coffee recipe that calls for dairy products like regular milk and cream is not vegan. There are many milk alternatives at most coffee shops these days, but you’ll generally have to pay a premium for them. If you’re looking for non-dairy milk to use at home, almond milk, coconut milk, and oat milk are three of our favorites to use in coffee.

New Orleans coffee is popular in – you guessed it – New Orleans! It is unique among coffee drinks because it uses chicory to give coffee an unusual, spicy kick. We weren’t sure the first time we heard about New Orleans coffee, but it is delicious. Chicory is a bitter herb that is vegan, so people that follow vegan diets can enjoy New Orleans coffee without any alterations to the recipe.

Cold brew is one of our favorite methods of making coffee, and it’s entirely vegan. One of the major benefits of cold brew is the natural sweetness cold brewing coffee can coax out of coffee beans. Unlike ordinary coffee, cold brew is sweet and smooth even without milk and sugar.

Turkish coffee is known for being extremely strong and bold and also for its spiciness in some cases. If you tried the New Orleans coffee recipe and liked it, this is another one for you. Our favorite version includes cardamom and cloves, which give it a tasty, warming quality perfect for cold winter nights.

Coffee liqueur is surprisingly easy to make and doesn’t require any non-vegan ingredients. This is our favorite recipe, inspired by the popular flavor of Kahlua. To make this delicious vegan coffee treat, you’ll need instant coffee, vanilla bean, vodka, and white and brown sugar. It’s not complicated, but it takes some time to prepare. Trust us, it’s worth it!

Irish coffee is one of those cocktails where everyone seems to have a slightly different recipe. Classic Irish coffee is simply Irish whiskey in coffee, but the modern version is almost always served topped with whipped cream. You can make this recipe with or without vegan whipped cream, and either way, it’s delicious.

Lattes are milky drinks, there are no two ways about it. You might think that making a vegan latte is as simple as substituting almond milk or coconut milk for dairy milk and calling it a day, but, unfortunately, it’s not that easy. Frothing milk is a huge part of making a creamy, delicious latte, and not all non-dairy milk froths easily. This recipe uses oat milk, which we’ve found to be the best frothing non-dairy milk.

Vegan alternatives to many foods can be difficult to make or are not similar enough to reproduce the traditional dish’s flavors. Thankfully, coffee is one of the easiest sectors of the culinary world to create vegan alternatives that are nearly identical to the original versions. Many recipes are vegan already, and those that require milk can often be made vegan friendly by substituting non-dairy milk.

We hope you’ve found this selection of vegan coffee recipes helpful! Try them out for yourself, or feel free to steal some of the ideas and use them in your own vegan coffee recipes. We only ask that you let us know if you stumble on something great so we can try it ourselves.

How to Make Coffee Liqueur at Home

If you love the flavor of coffee in your cocktails, why not make coffee liqueur at home? Though you can buy liqueurs like Kahlua and

How to Make Whipped Coffee Without Instant Coffee

How to Make a Flat White Coffee (Simple Steps)