How Does an Espresso Machine Work? 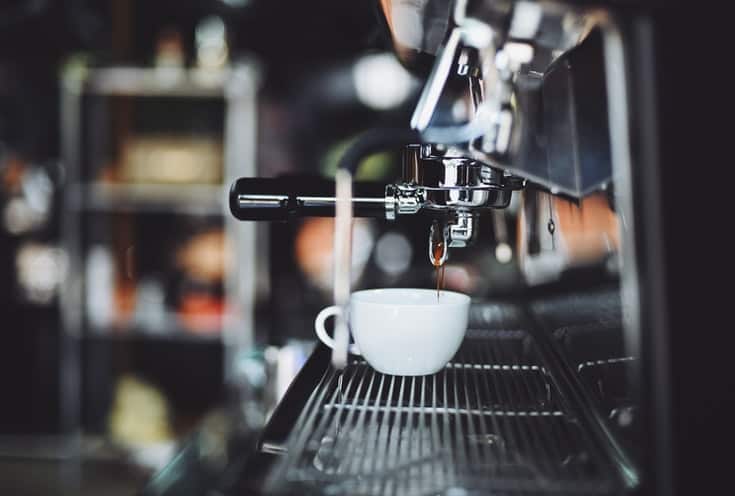 We have all enjoyed a good espresso. Whether it’s something you have on occasion or something you drink daily, many coffee enthusiasts don’t know how the bold shot is made. Unlike a standard drip coffee maker or other brewer, an espresso machine is a bit more complicated.

If you are curious about the inner workings of this centuries-old machine, we have you covered below. In this article, we will give you the basics of how espresso is made. Not to worry though, we have kept it to the basic principles and key components.

If you want to impress the next “all-knowing” barista you come across, keep scrolling below.

Have you ever asked your grandparents to teach you something? If you have, you know there is no getting around the history lesson first. Well, we agree!

First Patent Owner: The first espresso machine was invented in 1884 by Angelo Morlondo who lived in Turin, Italy. Although he owned the first patent, his invention wasn’t widely known as he primarily used it for his own use.

Second Patent Owner: Sometime during the early 20th century, Luigi Bezzerre purchased the patent and made several improvements. From there, the popularity increased but was still not widely used. It was Desiderio Pavoni who bought the patent and put the invention into the history books. 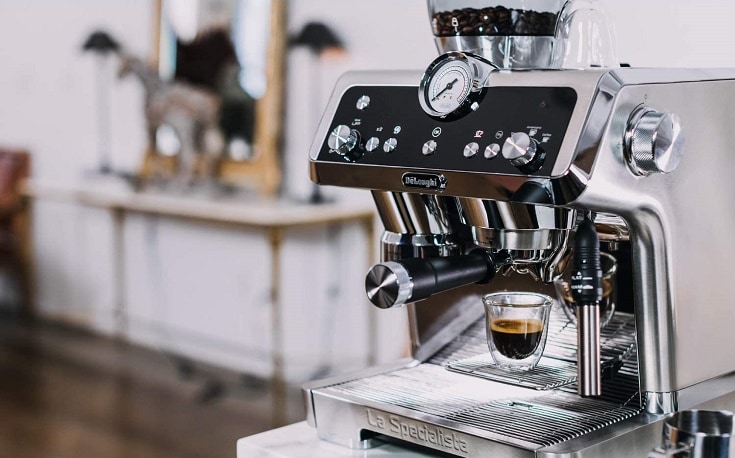 Third Patent Owner: After Pavoni took over in 1903, he made even more innovations, many of which are still used today. One of the most important changes he made was the pull valve that kept the espresso from spraying. That being said, these changes were primarily done to be more convenient for baristas.

It was due to the growing popularity of the machine that the term “espresso” was coined by Pavoni as it means “made on the spur of the moment.” It was not long before others started to make similar machines to meet the demand, and the rest is history.

Before we get started on the mechanics of the process, there are a few terms you should be familiar with:

The Espresso Machine Parts and Pieces

Not all of these pieces are on the inside like the portafilter and tamp, yet they all play an important role.

The Four Phases of An Espresso Machine

Besides the basic parts, it’s also important to remember that there are four phases when making an espresso. These phases are the water source, pump, boiler, and group head. These parts represent the stages the machine goes through to make the coffee.

In theory, espresso is very simple to make and works on the same principle as a drip coffee maker. You simply force hot water through finely-ground coffee beans. That being said, the temperature of the water, the pressure at which it goes through the coffee, and several other perimeters have to be precise to make a good cup of espresso.

How Espresso Is Made:

The few patent holders that first designed the espresso machine realized quickly that making a small yet bold cup was going to take some innovation and trial and error to get it right. Our modern machines are based on their designs.

The first phase of the machine is the water source. This can be either one of two things; a reservoir or a direct feed connection. Most cafes and coffee shops have espresso machines with a direct connection. This is where the water line is connected directly to the machine from the plumbing system.

Smaller machines that are used for home use typically have a reservoir. This is a large tank of water that needs to be periodically refilled. There are also machines that have both allowing it to have a reserve of hot water but doesn’t require refilling.

This is where the process starts, as the water is pulled from the tank. 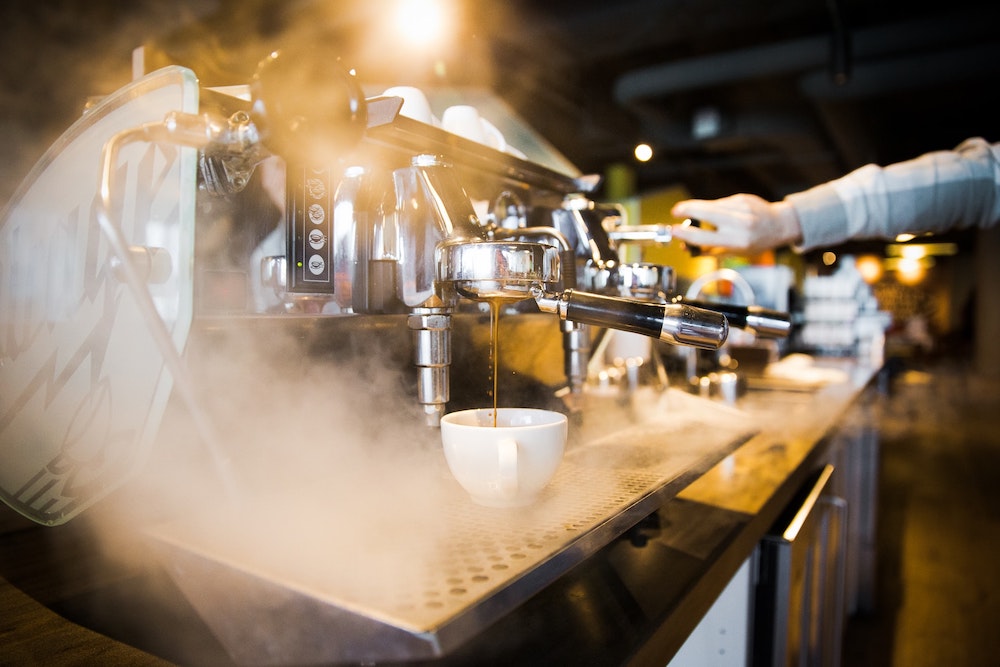 To give you an example, if you put sand in a tight-knit vegetable strainer and run your faucet over it, you will likely see a little sand in your sink. If you sprayed your garden hose into the same strainer, the sand would be all over the sink.

The pressure needed for an espresso is based on the same concept. The water needs to be forceful enough not to just make it through the coffee, but to also extract the right amount of flavor, oils, and caffeine from the grounds. Remember the tamp? This is why it’s important as you use it to pack the grounds tightly, which sustains the pressure by not allowing the water to go through too quickly.

The original espresso machine needed nine bars of pressure to operate. The barista would use a lever to create it which, incidentally, coined the phrase “pulling an espresso.” Now, modern designs regulate pressure with dials, and they need approximately 130 PSI.

Precision temperature is needed to make a good espresso. Along with the pressure, the heat of the water determines how much flavor is extracted from the grinds—among other things. Even the smallest change can make a noticeable difference in the taste.

This is why the boiler is important. They are typically made of aluminum, zinc, or iron, and they use electric heating elements versus the original machines that used fire. One problem with a basic boiler, however, is it can’t control the temperature to such an exact degree.

To regulate the temperature, espresso machines use one of two controls. The first and most popular is the proportional integral derivative controller or PID. It is a computer chip that uses a probe inside the boiler with a connection to the heating element. It can then monitor the temp and adjust it as necessary.

The second is a digital temperature control that more or less works the same way as a PID. The main difference is the PID’s digital panel gives the user more information. In addition to that, you can change the algorithm with a PID but not with a digital temp controller.

Some espresso machines also have dual boilers. This is important for steaming and heating milk which requires a different temperature than the coffee. With two heating tanks, the machine can produce hot water at different temperatures. A benefit of this is both elements (brewing espresso and steaming milk) can be done at the same time.

An important part of the espresso machine is the steam wand. This is the most precise way of steaming milk. It can create smooth and creamy milk that is warmed, or it can make frothed milk.

As espresso machines became widespread, other drinks that are espresso-based developed like cappuccinos, lattes, Americanos, and many more. All of these coffee drinks are made with a single or double shot of espresso and various amounts of warmed and frothed milk.

How It Heats Milk

The espresso machine needs to heat the water to a hotter temperature than it used to make the coffee. To create steam, you need boiling water that is considerably hotter than what is needed for brewing.

Separate temperatures are accomplished with a dual boiler, as described above. Another way to do this is with a heat exchanger. In this case, the boiler would only be used for the steam wand, and a separate tube would run from the water source through the center of the boiler. Unfortunately, a heat exchanger is not as accurate as a dual boiler.

The steam wand is a long and thin pipe-like apparatus that is attached to the outside of the machine. Steam comes out one end that can be adjusted for intensity with a dial. It is used to both heat and create foam. The milk is poured into a metal cup, and the wand is inserted into the milk by holding the cup up to the end of the wand.

The steam comes through the end warming the milk. Moving the cup in circular motions, the air bubbles in the steam will eventually cause the milk to transform into a foam-like liquid that sits on top of the espresso.

The group head is the connection between the boiler and the portafilter. It is the last stop for the water before it is pushed through the coffee grinds.

As the name suggests, the group head is a “group” of parts including the portafilter, the portafilter locking mechanism, the pump activation, and the pathway for the water.

Though this part of the machine is made of basic elements, it is still an important part of the overall process. Group heads vary in design, materials, cost, and efficiency. The last is most important as some are made for commercial espresso machines with industrial components while others are less durable.

After so much information, it is easy to lose track of the general purpose of the machine. To give you a quick recap, take a look at how a basic espresso machine works through the different phases and pieces:

Espresso has long been considered the original coffee, and it is just as popular today as it was when the machine first went public. While we have made modern improvements, the outcome of the machine has always been the same. To create a quick cup of rich and bold espresso!

Does Coffee Make You Smarter?

Coffee gets us going in the morning, perks us up in the afternoon, and fuels our busy lives, but did you know that it also