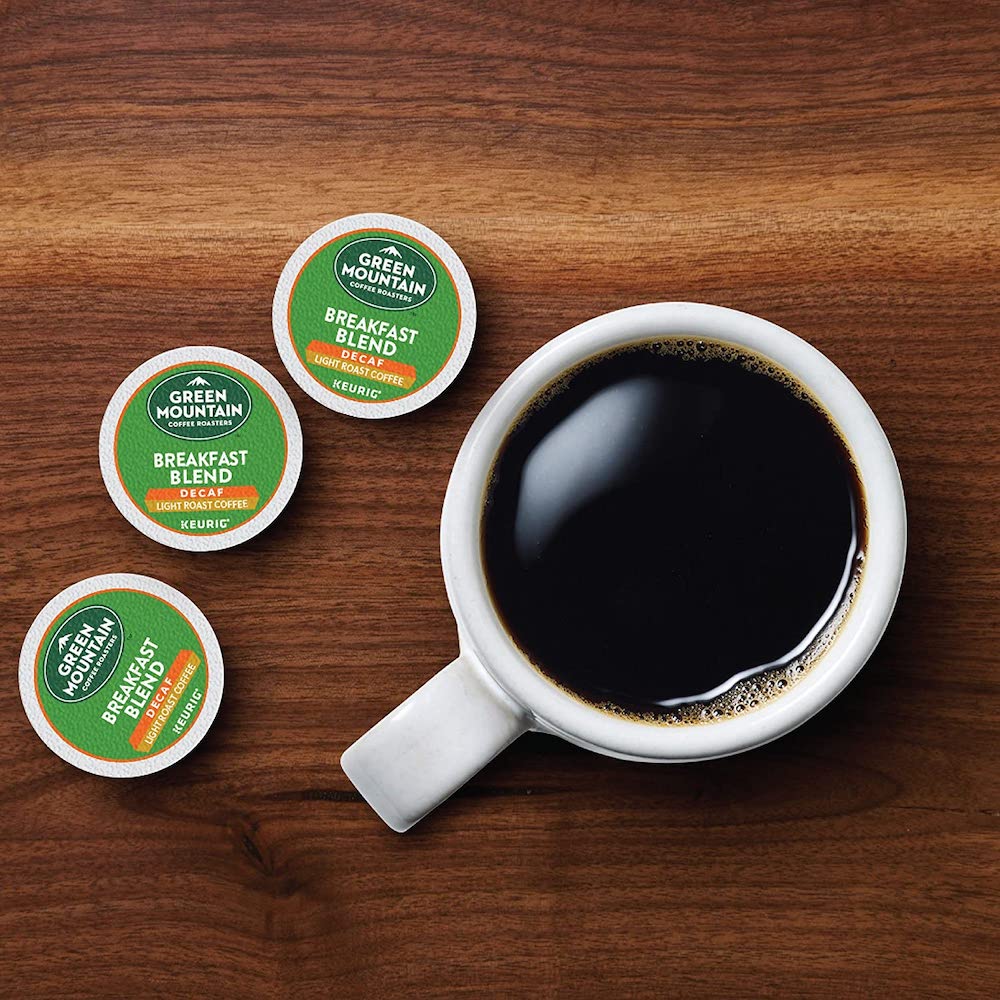 Decaffeinated coffee offers a special set of challenges to coffee drinkers. Because removing the caffeine involves heating the beans, by the time they’re roasted, the flavor almost always takes a hit. Finding something that tastes like caffeinated coffee is a challenge, and that’s especially the case when it comes to finding a K-cup version of it.

Fear not. That’s why we wrote reviews of some of the decaf coffee K-cups that you’re likely to find while shopping. We also included a buyers’ guide to help you make the right purchase decision, and give some insights into the different decaffeinating processes.

We wish you luck in finding a decaf coffee you really like and hope that we played a role in helping out.

A Quick Glance at the Winners of 2021 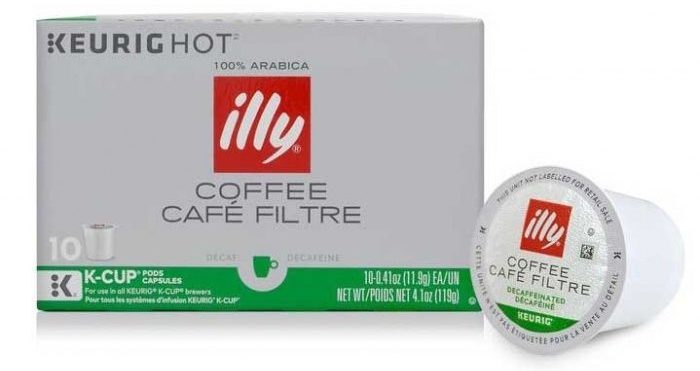 Creating a medium roast decaf that has balanced, complex flavor is challenging. Our top pick, illy’s Decaffeinated, does exactly that, transforming its famous Italian flavor into a convenient K-cup.

We also really like the value these K-cups bring. Though they may seem a little pricey, the bulk package will last you for a long time. And the per-cup cost? These K-cups are affordable even by what lesser brands charge.

If you’re looking for a lighter coffee, this may not be your pick, but if you love strong, balanced flavor, illy’s Classico will probably do the trick. You won’t even miss the caffeine!

All in all, we think this is the best decaf K-cup out there. 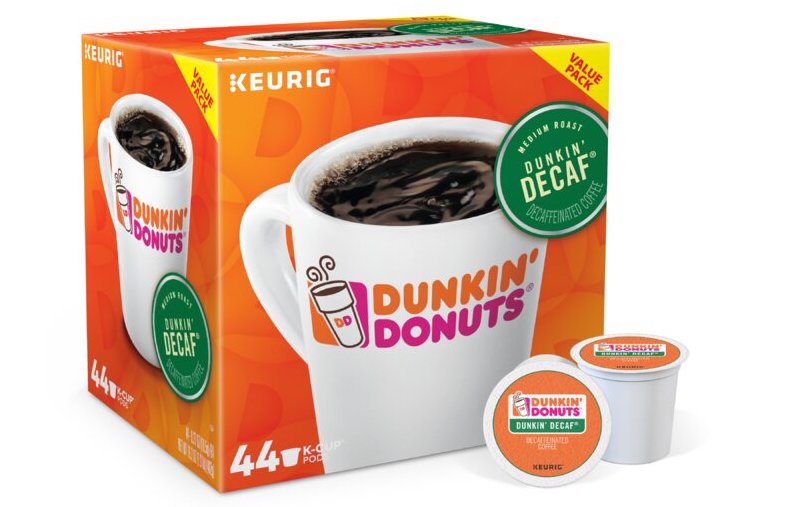 Everyone knows that coffee and donuts go together perfectly. So it makes sense that Dunkin’ Donuts would produce tasty, if somewhat basic, coffee to go along with its famous donuts.

Decaf K-cups are a difficult thing to get right, but this brand offers consistent, traditional flavor, along with the convenience of single-serve brewing. They also offer flavored coffees like French vanilla and pumpkin spice.

The Dunkin’ Decaf K-cups won’t challenge your tastebuds, and they’re a little pricey. Still, if you’re looking for a delicious, familiar cup to start your day, they’re a good option. 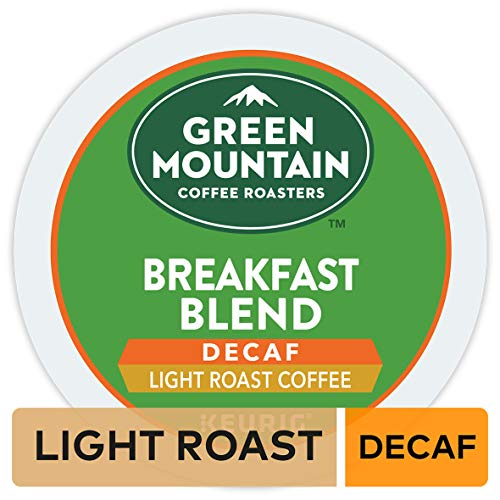 When it comes to great K-cup coffee, Green Mountain is a reliable brand. Its Breakfast Blend Decaf carries that forward, setting a high bar to measure other decaf K-cups by. You might be able to find something else that does everything it does right, but we don’t like your odds.

The two things it gets the most right are the flavor and its value. Those are also the two very basic things it needs to get right. Making a good decaf coffee is hard enough, but making a decaf K-cup that consistently offers great flavor, doesn’t have an acidic, bitter aftertaste, and doesn’t cost an arm and a leg means getting everything right.

One word of caution is that this coffee tends to clog coffee makers more quickly than you’d like. Keep an eye on it, and most importantly, take care to clean your coffee maker. Stay on top of it and clogs shouldn’t be much of a problem. 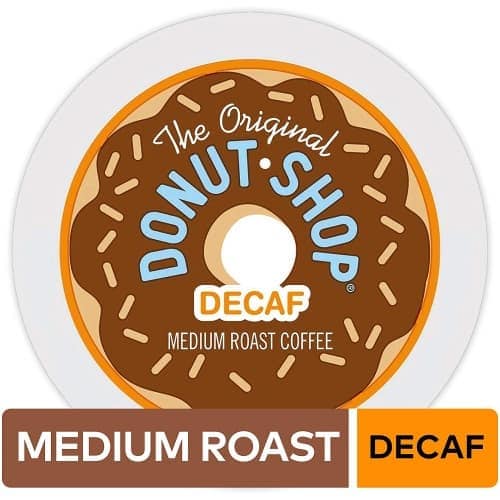 Not to be confused with the competing better-known Dunkin’ Donuts coffee line, The Original Donut Shop has a great-tasting decaf K-cup. In a strange twist, in fact, it might be the perfect accompaniment to a post-dinner dessert and not something to dunk a morning donut in.

There are two things that dropped it to the number three ranking. The first is that compared to the top two picks, it’s pretty expensive on a per-cup basis. K-cups, in general, are much more expensive than coffee you scoop from canisters, so an expensive K-cup brew is going to be a mighty expensive cup of joe.

If it were the perfect cup of coffee, that might be understandable, but this one has some consistent bitterness to it. It’s not much, but it’s enough that the overall value is diminished. 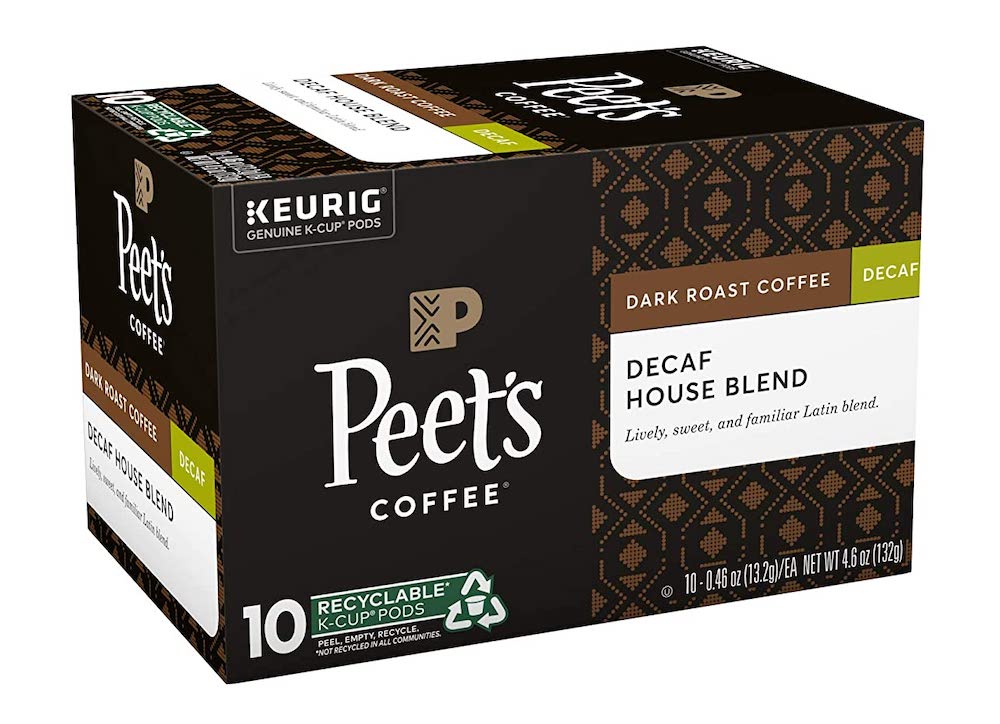 If you’re a coffee aficionado, Peet’s Decaf House Blend pods might be the coffee you’re looking for. It’s just simply a great cup of coffee, one that’s so well done that you might have to remind yourself it’s decaf. It’s a full-bodied brew with great flavor. We assume the secret is using heated water as a solvent rather than as a chemical.

Two things drop it down to fourth place. The first is that the pods aren’t always fully sealed, so you might have to pitch one or two from every box. That’s like buying a carton of a dozen eggs and consistently finding some with broken shells.

It also pushes up an already really high per-cup price. These are much more expensive than most of the competitors, and while it’s a great coffee, it’s not superior enough to make it worth it. 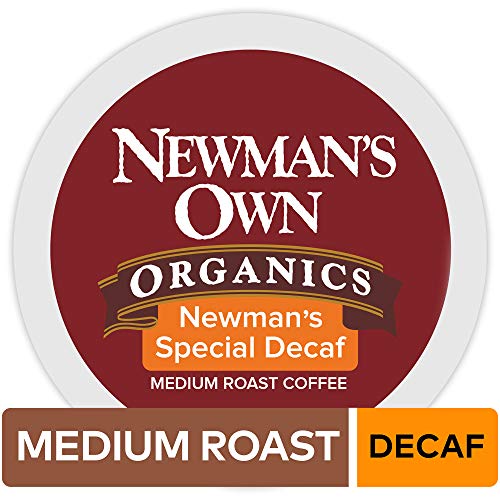 Normally the Newman’s Own line of food products is pretty good, and they are intended to soothe any health and social concerns you have. The foods are marketed as made from the freshest, best organics, and made in a way that has a reduced environmental footprint.

The Newman’s Own decaf K-cups qualify for that. You can drink them all the livelong day without worrying about the simple farmer who grew the beans. They also have a pretty decent flavor. You won’t spit it all over your laptop screen in disgust.

There is better, however, much better. These K-cups hit notes of quality inconsistently. One other drawback is that they are consistently a little more bitter and acidic than other brews. 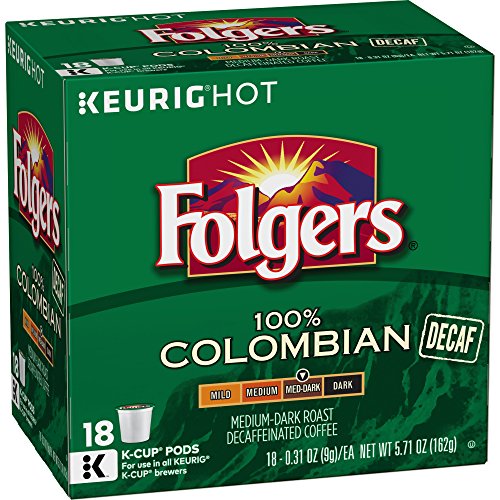 The best thing you can say about Folgers coffee when it comes to traditional drip makers is that the flavor is consistent, albeit consistently mediocre. That translates to making decaf K-cups. The Folgers Medium-Dark Roast K Cup Pods have a recognizable flavor. It’s just not the sort of flavor that would cause a lot of people to jump up and down about how great it is.

This is a good option if you’re stocking an office coffee service, especially if some of the people stubbornly refuse to chip in money. Buy it by the truckload and have it on hand, and if someone wants better, they can shell out their own money for it. 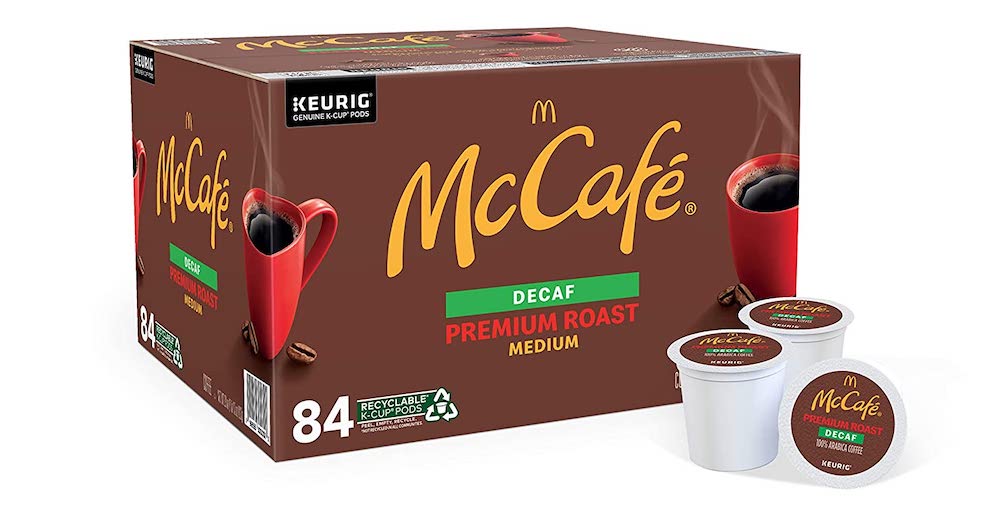 McDonald’s might be a good go-to if you want a burger in a hurry, but pulling off a decaf coffee pod requires skill and precision that the restaurant chain just doesn’t have. We’ll give it credit for trying, and for bringing it in at a price that, for Keurig coffee, is pretty affordable. The result, however, is pretty much the same as comparing a burger off the company’s value menu to a brewpub burger.

We’ll acknowledge the price because that’s the biggest thing these pods have going for them. If you just want something hot to drink that’s not going to keep you up all night, this is definitely an option. That’s especially the case if you don’t have a lot of money to spend, and if maybe your taste buds don’t work.

When it comes to quality, however, it just falls well short. If you’re looking to spend less money, get dunkable decaf bags.

Knowing how to shop for decaffeinated K-cups starts with knowing a little about decaffeinated coffee. To start this buyers’ guide, we’ll go through a quick intro to how decaf coffee is made.

RELATED GUIDES: Which Keurigs performed best in our comparisons?

There are four basic processes by which caffeine is leached from unroasted coffee beans:

2. Another method involves soaking beans for a long time in hot water, where the things that give the coffee its flavor are removed. The beans are moved to a different tank and soaked in a chemical solvent that removes the caffeine. Then the beans are returned to the first tank, where they reabsorb the flavors and oils. This is called the indirect-solvent technique, and it’s popular in Germany.

3. A third method, the direct-solvent technique, involves steaming the beans for half an hour, which opens pores. They’re then soaked in chemical solvent repeatedly for about half a day. They’re steamed again to remove any residual solvent.

4. Most organic decaffeinated coffee is made using the Swiss method. One batch of beans soaks in very hot water, which removes not just the caffeine but also the flavor agents. The flavorless, decaffeinated beans are discarded. The water is passed through a charcoal filter, which removes the caffeine. That flavored water is then used to leach caffeine from a fresh batch of beans. Because the water molecules are already fully bonded to the flavor agents from the first beans, they can only bond with the caffeine. That leaves the beans both decaffeinated and with minimal flavor loss. It’s also the most environmentally sustainable way to decaffeinate coffee.

Now you know, now you roast

All this takes place before the beans are roasted. Since all four basic methods rely on heating the beans, turning them into drinkable coffee means reheating them. One challenge in finding consistently good decaffeinated coffee is that in reheating the beans to roast them, a lot of the things that give coffee its flavor are destroyed.

The longer you roast coffee beans, the darker they become. The darker they become, the deeper and more robust the flavor. However, roasting a long time for dark roast is like taking something pre-cooked and cooking it as long as it takes to cook the same thing from raw. Light roasts, which tend to taste a little more complex, retain more of their natural flavors because they aren’t roasted as long.

Keep this in mind when shopping for decaf K-cups. It’s hard to find consistently good decaffeinated coffee, and it’s really hard to find consistently good dark roast coffee. A handy tip might be to move down one step on the scale when going from caffeinated to decaf. If you drink dark roast caffeinated, try a medium decaf. If you drink medium caffeinated, try a light roast decaf. The flavor isn’t going to transfer. Medium decaf won’t taste like regular dark, but it’ll have more flavor and at least come close.

Knowing how to buy decaffeinated coffee really begins and ends in knowing a little about the different methods of removing caffeine and what it does to the overall flavor. Once you have that information, you can figure out what you’re looking for.

Beyond that, the two biggest criteria you’ll probably use are price and brand. Brand is useful as a starting point in buying decaffeinated coffee. You can start with the decaffeinated version of the coffee you already love and branch out from there. Price, of course, is always helpful. Because K-cups are pretty expensive, anyway, and because decaffeinated coffee is notoriously poorly flavored, there’s good incentive to go low-priced. That is unless you find a K-cup line you love, in which case we say buy all you want and don’t worry about price.

We hope that our article helps you find the best decaf K-cups for your tastebuds. Happy brewing!

Did you know that reusable Keurig cups are a thing? See our top 8 picks here.

If you’re just looking for a place to buy coffee beans, you can find them in just about every place that sells coffee of any