Does Decaf Coffee Have Caffeine? 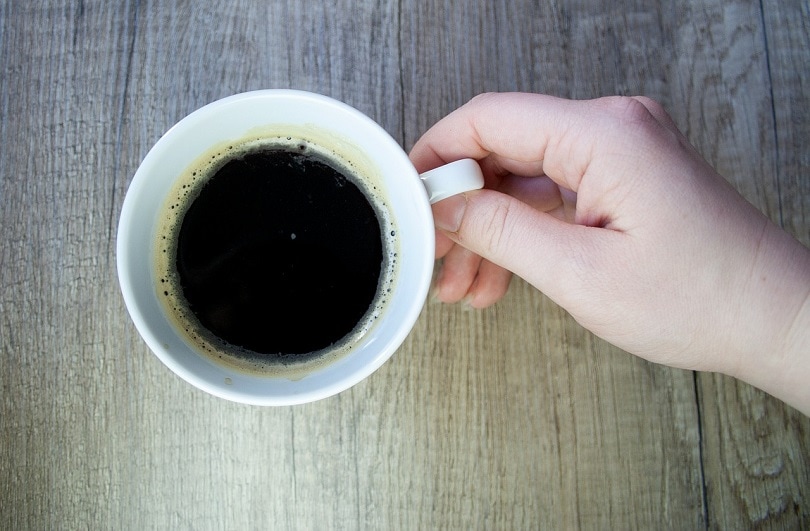 Decaf, or decaffeinated coffee, has become popular among coffee drinkers as of late. This coffee is a great coffee alternative for those sensitive to caffeine because it isn’t quite as powerful. Yet, it provides the same yummy taste people look for in their morning cup of Joe.

Still, decaf coffee isn’t caffeine-free, despite marketing techniques that imply otherwise. Instead, decaf coffee includes a reduced amount of caffeine. In this article, we’re going to look at all things decaf coffee. That includes answering questions like “What is decaf coffee?” “How is it made?” and “Does decaf coffee have caffeine?” Let’s get started to find out these answers and more.

What is decaf coffee?

Decaf coffee is a special type of coffee with a reduced amount of caffeine. Even though it is not caffeine-free, it contains substantially less caffeine than a regular cup of coffee. In order for coffee to be deemed decaf, it cannot be over 0.1% caffeine. To put that percentage in perspective, brewed decaf coffee will typically have at least 97% less caffeine than a regular coffee cup.

Using these numbers, an average cup of coffee is 12 ounces in size. This normally results in around 135 mg of caffeine. A decaf cup would only contain 4 mg of caffeine, which is about a 97% reduction as expected. So, although decaffeinated coffee has considerably less caffeine, it isn’t caffeine-free.

Should I drink decaf coffee?

Even though many people love the energy-boosting side effects of regular coffee, some people should opt for decaf coffee because of caffeine sensitivity. If you struggle with anxiety, headaches, insomnia, increased blood pressure, irritability, jitters, or nausea, you might want to switch to decaf coffee.

Those who struggle with heartburn might want to switch to decaf as well. Studies are suggesting that coffee can trigger heartburn and gastroesophageal reflux disease. The same goes for pregnant women and those who take caffeine-interacting medications.

If you still need a little bit of coffee but must be incredibly conscious of how much caffeine you consume, you might want to select a decaf dark roast. This roast is lower in both caffeine and acid. This makes decaf dark roast coffee a better option for people who are stimulated by even decaf coffee.

RELATED: What are the health benefits of drinking decaf coffee?

The decaffeination process often affects the flavor profile of the coffee. As a result, it typically does not have the same robust flavor, but it is still clearly identifiable as coffee. There are newer decaffeination processes that leave flavor compounds intact, which we will discuss later.

For coffee to be decaf, decaffeination processes are used. Decaf coffee will be made using one of three methods for drawing out the caffeine: water, organic solvents, or carbon dioxide. Additionally, there are two main bean types: Arabica and Robusta.

With all three methods, the decaffeination process begins by soaking unroasted coffee beans, causing the caffeine to dissolve. When the caffeine becomes dissolved, the bean’s pores are opened. This allows the caffeine to be extracted.

The only organic method of the three is the Swiss water process, and it relies on osmosis. This process results in a guaranteed 99.9% decaffeinated final product. The more common process is solvent-based. It uses solvents like methylene chloride, ethyl acetate, and water to extract the caffeine. Chemicals are not found in the coffee because they evaporate.

The newest decaffeination process is called the carbon dioxide process. Carbon dioxide is naturally found in coffee. It can be used to remove caffeine without impacting the flavor, which is a common critique of decaf coffee. This method is highly efficient but expensive.

In addition to the decaffeination process, the type of bean used can affect the caffeine level. There are generally two coffee bean types: Arabica and Robusta. Robusta is more bitter between the two and has nearly two times more caffeine than the sweeter Arabica.

Since Robusta has more caffeine, decaf coffee made from these coffee beans will often have more caffeine leftover in the final product.

How much caffeine in decaf coffee?

Exactly how much caffeine is in the coffee will depend on the type of coffee you are drinking. Regardless of type, nearly all decaffeinated coffee will contain at least a little bit of caffeine. It is estimated that the average cup of decaf coffee contains 7 mg of caffeine, compared to a regular cup with 70 to 140 mg of caffeine. 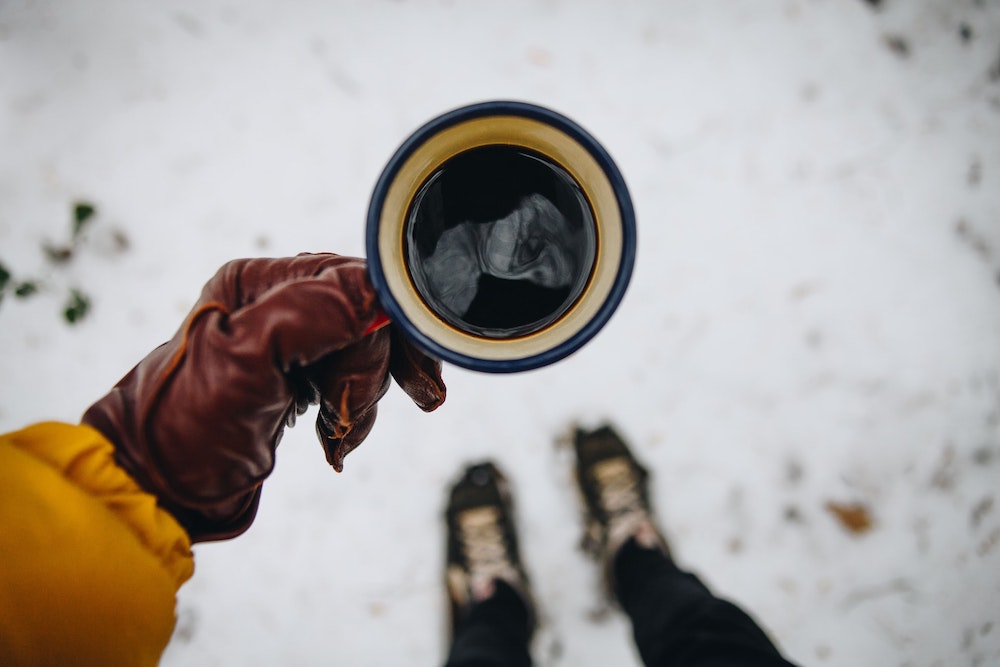 Based on these numbers, drinking between 5 and 10 cups of decaf coffee will add up to about the same caffeine content of that found in 1 to 2 cups of regular coffee.

Because there are different methods for decaffeinated coffee, the exact caffeine content for a cup of coffee will differ from store to store. Some studies have even researched how much caffeine is in one cup of decaf coffee in the nation’s most popular coffee shops.

Here is a better breakdown of the average caffeine content for decaf coffee based on type:

Since decaf coffee contains some caffeine, you need to be cautious about how much you drink, especially if you are cutting down on your caffeine content due to kidney disease, anxiety disorders, or any other illness that causes severe caffeine sensitivity. 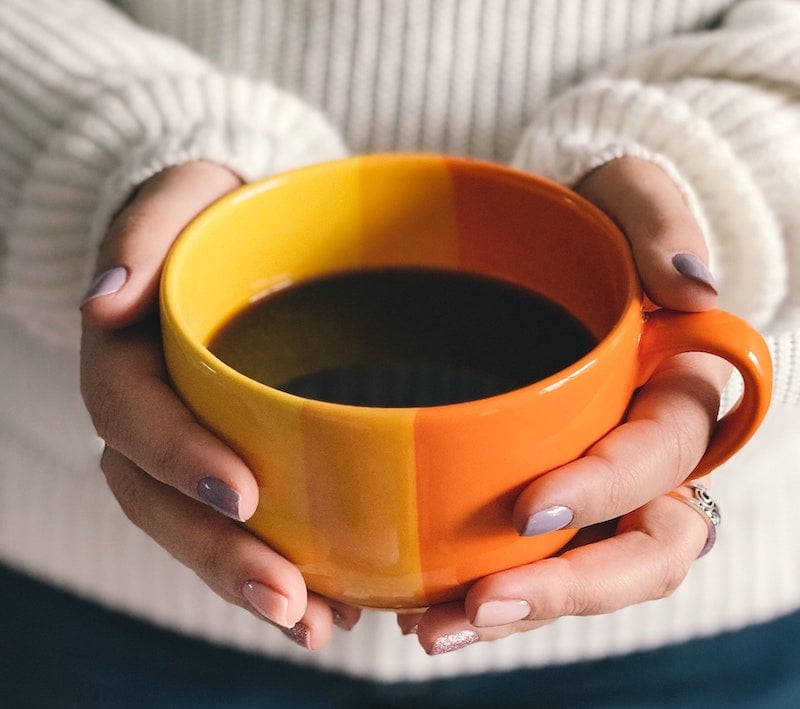 It is best to research the exact caffeine content in the coffee you are drinking by looking online, reading labels, and contacting manufacturers if necessary.

Additionally, you may not want to drink multiple cups of decaffeinated coffee. Eventually, you will consume just as much caffeine as you would have when drinking regular coffee, defeating the purpose of opting for decaf coffee in the first place.

Switching to decaf coffee is a great way to cut your caffeine content, but it doesn’t cut out all caffeine. With 97% less caffeine than regular coffee, you will still get a little bit of energy that shouldn’t trigger minor caffeine sensitivity. The exact caffeine content will vary based on the decaffeinating process, bean type, roast, and store.

If you are incredibly sensitive to caffeine or are taking medications that interact with caffeine, it may be best to avoid coffee altogether, including decaffeinated blends. Even though decaf coffee has considerably less caffeine than regular coffee, caffeine is still present, and you should be cautious when drinking it.

What is a Double Espresso?

13 Great Things to Do with Leftover Coffee