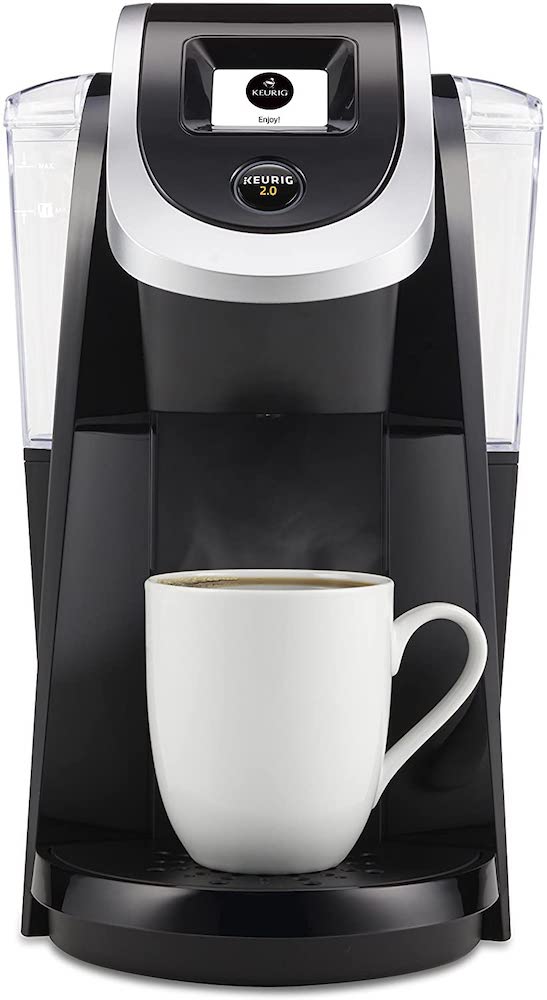 Keurig has long been a pioneer in single-cup brewing. Keurig’s K200 finally allowed users to make coffee in bulk. That made the same Keurig coffee brewed with Keurig simplicity available for an entire breakfast table instead of individual java drinkers. In response to criticism that its spent pods were cluttering landfills, Keurig also made its 2.0 pods reusable, and held prices down to make the K200 a great entry-level Keurig.

To do all this, Keurig sacrificed variety. The K200 is compatible only with 2.0 pods, and to brew a whole carafe of coffee requires a Keurig-built accessory. That means someone who buys the Keurig K200 is locked into the Keurig product line.

Keurigs get criticized for creating a lot of plastic waste. In response, Keurig released its 2.0 line, which features reusable K-cup pods. The K200 also accommodates a refillable coffee pod from online vendors that allows people to use their own coffee grounds. All of this significantly reduces the Keurig’s environmental footprint.

Brewing for strength and volume

The K200 has options for regular brew or strong brew for the same size cup. With past models, if you wanted stronger coffee, your only option was to simply brew less of it. Now you can brew a 10-ounce cup of coffee that is stronger than a six-ounce one. Keurig has also made brewing a full carafe of coffee a feature.

Keurig added some features its customers have wanted for years. What it didn’t add were complications. You might have more options on brew size and strength, but it’s still push-button coffee brewing. You just have an extra button or two to press before it gets to work.

What is the tallest cup that the K200 can accommodate?

If you remove the drip pan, the K200 can brew into a cup seven inches tall.

Can you use your own coffee grounds in the K200?

Yes. Some online retailers have refillable cups intended for use in Keurig machines. It’ll cost a little extra money, but it also means you can use your own coffee.

What are the nine sizes of cups?

The K200 can brew to 4, 6, 8, and 10-ounce cups, and can brew a carafe. The other four sizes are achieved by using the Brew Strong feature for the four cup sizes. 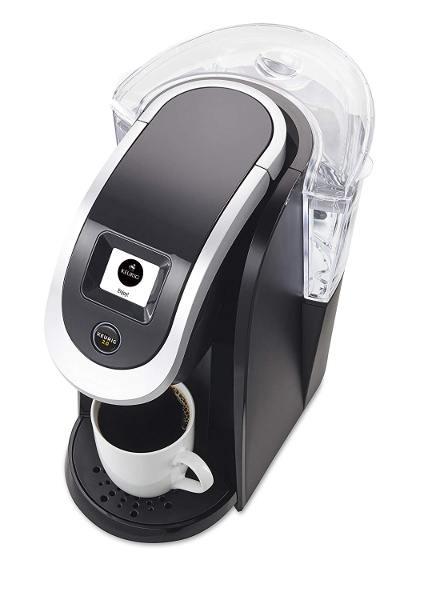 Obviously, we couldn’t do the K200 justice without comparing our experience with that of other people. Not every machine is made the exact same way, and not everyone has the same kind of personal reaction to the new features of a new machine. Plus, it’s fun to read online reviews because people say the wackiest things.

So, we surfed, and are happy to report what we found.

People were generally pleased with the Keurig K200. Many of them were, of course, happy with how the machine functioned overall. Keurig’s continued simplicity is an attractive feature. The fact that you can pop a pod into a hole, push a button, and walk away with a fresh hot cup of coffee is just flat-out attractive to consumers.

In fact, people focused a lot more on the basic Keurig operation than they did on the new features. Keurigs take a beating for a large ecological footprint because the pods aren’t biodegradable and create a massive garbage issue. Only a handful of people who bought the K200 acknowledged that as a good thing about the K200. Most people instead focused on the brewing options it offers. Users were concerned with the basics: does it brew coffee and do a good job? The answer is yes.

What people didn’t like, in fact, is related to Keurig’s design changes. Limiting people to Keurig’s 2.0 pod line was unpopular. While the company increased the options for strength brewing and size, it limited access to older K-cups from a wide range of roasters. There was discussion of how to take extra steps to make those older K-cups usable in the 2.0 machines. If you have a bunch of older K-cup pods, using them up will require you to learn how to do a workaround.

It also takes longer to brew a cup of coffee in the K200. Older models brewed coffee in less than a minute, it was noted. The K200 can take twice that.

Overall, however, consumers liked the job the Keurig K200 does. It delivered what people want, a decent cup of coffee at the press of a button. At the end of the day, that’s mattered a lot more to people.

Keurig’s 2.0 line sought to address complaints about environmental footprint and limitations in brew strength and brewing for volume. The company did that by designing reusable pods, and by adding a feature to accommodate a whole carafe.

In doing that, it limited customers to Keurig 2.0 pods and a Keurig built-and-sold carafe. It also added time to the brewing process, so it’s not as fast and painless as in previous models. The K200 also lacks an auto-shutoff feature, so it’s not as carefree as previous Keurigs.

But that’s parsing details. The K200 is an affordable entry-level Keurig that is responsive to complaints customers had about its older models. It offers options in brewing strength and reduces its ecological footprint through reusable K-cup pods.

Update: we also recently published a list of the best dark-roast k cup pods. You can find the roundup here.

When your Keurig stops brewing, you may be at a loss. How can you get back to easy, one-touch cups of coffee — and prevent