Flat White vs Macchiato: Which Is Better? 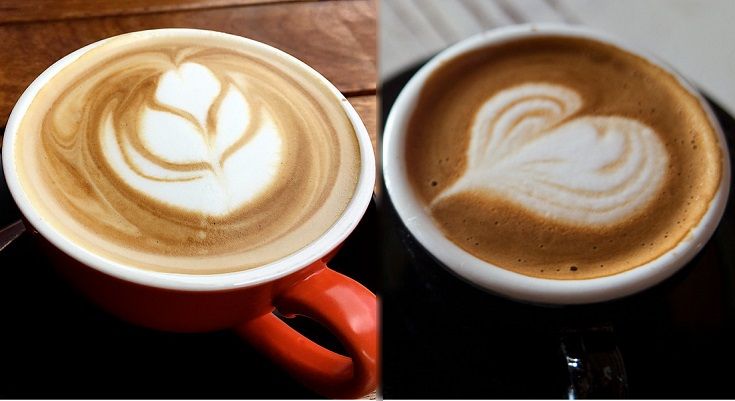 Tell us if this sounds familiar: you’re standing in line at your favorite local coffee shop when panic starts to set in. You start to feel anxious. “What should I order?”, you think. As you creep closer to the front of the line, you might decide just to wing it and say the first drink that comes to mind when it’s your turn. If any of this resonates, don’t worry, we do the same thing all the time. In the modern world of coffee, there are so many choices that it can be hard to keep track of what’s what and even more difficult to make a decision.

Flat whites and macchiatos are similar drinks in some ways, but they have significant differences that are apparent even at a glance. In this article, we’re going to give you a brief overview of each and tell you everything you need to know to make an informed decision next time you hit up the local café.

A flat white is a ristretto shot – a shot of espresso with half as much water as a standard shot – combined with 2 ounces of steamed milk. Sometimes flat whites are made with a double shot and 4 ounces of milk. The important element is the ratio of two parts milk to one part espresso.

How Strong is a Flat White?

You might think that a flat white would be a milky, weak tasting drink since it uses so much milk, but actually, it is fairly strong. Remember, a traditional flat white uses a stronger shot of espresso with half as much water, making it well-balanced, even with the extra milk.

Flat whites are blended coffee drinks rather than layered, which means they have a tan color and smooth texture. When you make a flat white, you have to take care when you froth the milk to encourage the formation of microbubbles. Baristas fold the milk back and forth with a spoon while frothing to create a layer of microscopic bubbles called microfoam or milk foam. The creamy texture many people associate with flat whites – and other espresso drinks with milk foam – comes from this layer of tiny bubbles.

How Hard is it to Make?

Many baristas consider flat whites more advanced drinks suitable for intermediate espresso enthusiasts who know their way around an espresso machine and milk frother. Compared to a macchiato, there are many subtleties that go into making a velvety, delicious flat white. If you are comfortable making a ristretto shot, you’re ahead of the game, but you also need to froth milk like a pro to get the characteristic smooth texture.

Macchiato is an espresso-based drink that has a layer of steamed milk added to the top. Unlike a flat white, macchiatos are standard shots of espresso and only use a few teaspoons of milk. They are much stronger and smaller than flat whites and are perfect for a quick pick-me-up.

Relative to a flat white, macchiatos are quite strong. They are the least milky drinks besides straight espresso and have a strong flavor and high caffeine content. Because they are so concentrated, some people won’t be able to handle the high acidity and are better off sticking to other drinks that aren’t as strong. If you love strong coffee, the macchiato will be right up your alley.

In contrast to the blended look of the flat white, macchiatos are layered drinks. Cafés often serve macchiatos in clear glasses so you can admire the separation of the espresso and milk. Because of the layered structure, drinking a macchiato is a completely different experience than drinking a flat white. When you sip a macchiato, there is a delightful rush of coffee that breaks through the milk layer and drags some of the velvety microfoam with it. The two flavors combine in your mouth and provide a unique – and delicious – flavor and mouthfeel.

Which is Right for You?

Macchiatos and flat whites are quite different drinks. We think it is probably pretty likely that you have an idea of which you would prefer already just from reading our brief descriptions. In general, people that like milder, softer flavors and milkier coffee will gravitate towards the flat white while people that prefer bold, robust coffee that packs a punch tend to like macchiatos better.

Some espresso drinks are nearly identical, and it can be easy to confuse them, even while you are drinking one, but it is hard to mistake a flat white for a macchiato after you’ve had one of each. They taste different and look different, and once you try them both, you will probably have a strong preference for one or the other.

Which Should You Make at Home?

Our philosophy is to keep the espresso we make at home simple and save the complicated, time-consuming drinks for when we go out to a coffee shop. Flat whites are firmly in the only-order-out category because they take skill and finesse to make. It’s not that you can’t make a flat white at home unless you’re an expert, it’s just much easier to ask your barista to whip one up. Frothing milk for a flat white is a surprisingly subtle activity, and you will probably be disappointed in your first homemade flat white if you’re used to the ones made by a professional.

On the other hand, macchiatos are not as difficult to make and are something we make at home from time to time. They use much less milk than flat whites and are less dependent on precisely crafted microfoam to get the most out of them. If you don’t have the best frothing technique, you can still make an excellent macchiato.

Despite the broad similarities – they both contain milk, for example – these drinks are actually quite different. Flat whites are a celebration of the interplay between milk and espresso, and making on requires practice and sophisticated frothing ability. Macchiatos also contain milk and espresso, but the milk is there to accent the espresso rather than blend with it as an equal partner.

If you like milky coffee that puts espresso and milk on an even footing and enjoys thick, creamy layers of microfoam, you’ll love flat whites. Instead, if you like stronger drinks that are dominated by the espresso and only let the milk come along for the ride, you are probably better off ordering a macchiato. Both are delicious, and both have their time and place, so next time you’re out, give one – or both – a try!

Cortado vs Macchiato: Which to Choose?

Many coffee enthusiasts are familiar with macchiatos, but may not be as familiar with a cortado. With that being said, even java-lovers may not know