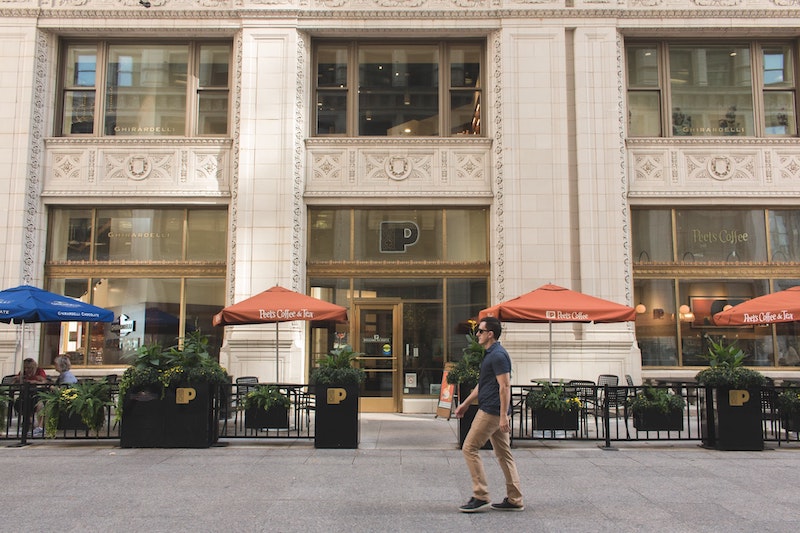 If you are a coffee lover, trying out new brands is likely a ritual that you can’t get enough of, and Peet’s Coffee may be a recent favorite. It tastes great and packs quite a punch, which has many people wondering how much caffeine it contains. The short answer is that it contains 267 mg of caffeine in a 16-ounce container, but keep reading as we compare that amount to other beverages to see how it stacks up. We also see how much caffeine is in the other products that Peet’s offers and how much caffeine is safe.

What is Peet’s coffee?

Peet’s coffee is a commercial brand found in many grocery stores. It’s marketed as a high-caffeine beverage that will help you get through your busy day, and there’s quite a selection of flavors, including dark roast, French roast, espresso, and many others. You can get the beans whole, pre-ground, or even packaged in a K-cup.

The packaging of Peet’s coffee states that there are 267 mg of caffeine in a 16-ounce serving, which works out to be about 133.5 mg of caffeine in a standard 8-oz serving. The exact amount of caffeine can vary slightly depending on the brewing method. Dark roasts also tend to have more caffeine than light roasts.

What Peet’s drinks have less caffeine?

Pete’s 8-ounce cans of lightly sweetened ice espresso beverages contain 100 mg of caffeine per can, and there are several flavors available, including black and white, mocha, vanilla, latte, and caramel macchiato. These beverages have slightly less caffeine per ounce than the fresh brewed or whole bean coffee.

How do Peet’s coffee’s caffeine levels compare to those of other beverages?

The standard cup of home-brewed morning coffee typically has 90–140 mg of caffeine in an 8-ounce serving. While Peet’s coffee is on the high side of this average, it’s on par with many other brands, especially its dark roast. The primary difference is that the recommended serving size is 16 ounces instead of 8, which brings the amount of caffeine up to 267 mg, more than half of the recommended daily amount. In comparison, an average shot of espresso contains about 64 mg of caffeine in a 1-ounce serving size. Black tea contains 47 mg in an 8-ounce cup, while green tea only has 28 mg. The amount of caffeine in prepackaged ready-to-drink tea is even less, as there is only 19 mg per 8-ounce serving. Soda typically has between 20 mg and 40 mg of caffeine per can, and energy drinks usually have around 150 mg but can go much higher. Large coffee drinks from popular chains like Duncan and Starbucks often contain the most caffeine and can provide you with more than 400 mg in a single beverage.

How much caffeine is safe?

Most experts recommend limiting your caffeine insect to about 400 mg per day. Drinking too much caffeine can have several health problems, including an increased heart rate and high blood pressure. It’s also a diuretic that can reduce the fluid in your kidneys and bladder, leading to the formation of stones. Drinking too much caffeine can also lead to nervousness, anxiety, muscle tremors, irritability, and difficulty sleeping.

While many people consider Peet’s coffee a high-caffeine drink, it’s not dangerous as long as you don’t consume more than 400 mg of caffeine a day, to avoid the risks of an accidental overdose, which can lead to health problems. However, since a single recommended serving of Peet’s coffee contains more than half of the recommended caffeine allowance, you’ll need to be mindful of other sources of caffeine, including energy drinks and chocolate. These can easily cause you to go over your limit.

Peet’s Coffee is a great-tasting blend that will help you get your day started, but it may contain more caffeine than you’re used to, especially if you drink a medium roast. That said, it’s not as strong as espresso, and as long as you are mindful of your overall caffeine intake, it’s safe to consume. However, the slightly higher than average caffeine amount and increased serving size can shock your body the first few times that you try it, leading to jitters or nervous behavior. It also gets you quite close to the recommended daily allowance for caffeine, limiting how much you can drink for the rest of the day.

Also, if you’re looking to save money at Peets Coffee then we really like this coupon overview from WeThrift.

Does Coffee Cause Heartburn?

We all love that first sip. Whether you’re rolling out of bed or getting pumped up to tackle another task, coffee is instrumental to the